but for God's sake conjure an illusion
on the damp refectory wall.

Mix the paint
in a festival of merriment -

you know the soul is a child
who loves to entertain

so trick her into playful rapture
with your cunning legerdemain.

It comes to us all
love's whispered betrayal

break the faithless bread of life.
Create man in perfidy

the senses’ passion
cheat the ideal with a kiss

swindle our minds with your fresco -
without art we could scarcely exist.

let the dancers dance, the acrobat leap
and Judas gyp his truss.

But for God's sake conjure an illusion -
paint to the music of us.

The poem refers, of course, to the Renaissance masterpiece The Last Supper, which Leonardo Da Vinci painted for Lodovico Sforza, the Duke of Milan, in the refectory of the Santa Maria delle Grazie in the mid 1490’s. Many of the details regarding Leonardo in the poem derive from Giorgio Vasari’s ebullient reconstruction in his Lives of the Artists. Vasari recounts how the prior of the Dominican Order, in whose church the painting was being produced, entreated Leonardo to speedily complete the work. As Vasari puts it “he would have preferred Leonardo, just like the labourers hoeing in the garden, never to have laid down his brush”. Leonardo had other ideas, sometimes spending half a day lost in thought and, doubtless, engaging in other animadversions. After threatening to model the face of Judas on the prior who was “so insistent and indiscreet” he was finally left in peace to progress the work at his own pace. The text is a plea to the Renaissance master, most of whose works were unfinished, to put aside quotidian distractions and complete the painting. The reference to the “steer’s intestines” in line five, incidentally, also derives from Vasari: “…Leonardo used to get the intestines of a bullock scraped completely free of their fat, cleaned and made so fine that they could be compressed into the palm of one hand; then he would fix one end of them to a pair of bellows lying in another room, and when they were inflated they filled the room in which they were and forced anyone standing there into a corner. Thus he could expand this translucent and airy stuff to fill a large space after occupying only a little, and he compared it to genius...”

Click on the pic below to view Leonardo's painting. 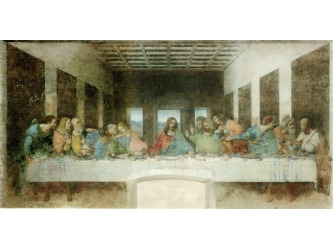