Eyes: descended
downcast from the empyrean

from out of a cloudless sky.
Infans – the playing child;

infans – the appearing angel.
Only his back meets the gaze, (not the eye),

and an ankle perplexed
at the foot’s

Caravaggio,
can you summon a form

with the solid beatitude
of the joy of youth born

transfigured
in appearance an angel?

Human – you are unutterable;
move – I am angelspeak.

What does it mean
to tread the wingless ground

through the barren deserts
you were born to meet?

Who summoned me to this flight?
Where is the one who will love me on sight?

The poem refers to Caravaggio’s painting Rest on the Flight to Egypt, which is permanently exhibited in Rome. I was fortunate enough to see the painting when it was on temporary display at the National Gallery in London at some point in the mid 1990’s. I wrote the poem several months after viewing the painting when I had only a very hazy recollection of it. I have always felt for some reason that the second half of the poem is spoken by the angel in the painting, seconds after arriving on the earth. This would explain the tone of bewildered rapture, of ecstatic disorientation. The first half of the poem, presumably, is spoken by someone – who? – viewing the picture.

Technically the text functions through the construction of an implicit correlative between the experience of the angel arriving on the earth and the act of viewing Caravaggio’s picture. In other words it posits a tension between the revelatory experience of viewing the artwork and the disenchantment engendered by the gap which exists between aesthetic illusion and the reality to which it refers. Hence it expresses the enchantment of disenchantment. This is its truth content. But this is a content produced through dialectical mediation: the tension established between the two aesthetic forms which constitute the material of the text, those of poetry and painting, the one an art of movement, the other of stillness, carry the burden of the truth content of the exposition. This is manifested in the speech of the angel, which disturbs the painterly surface of the work and shatters Caravaggio’s aesthetic illusion. For painting is a medium in which speech and movement have been abolished ontologically, even while their illusion is perpetuated by technique. The angel’s speech establishes a radical position of enunciation, propelling the textual receiver onto the stage of the artwork in a recognisably Nietzschean fashion. But to whom are these words, this angelspeak, addressed? This is the ethical kernel of the material, which forces the receiver to decide whether to construct themselves as the subject of the utterance. They may either become, or not become, the Subject of this address.

The poem, like many others in Theoria, is a cogent demonstration, in contrast to the all too commonplace and reactionary declarations by so called “radical artists” proclaiming the end of art etc, of how the revolutionary aesthetic work mediates the concept of art in order to orientate art towards an ethically and politically distinct futurity. This future, the future of art, is, contrary to popular belief, not foreclosed. Rather Theoria stands as an exemplary work in so far as it suggests that the future of art has scarcely begun to be explored. What is most true about our existence on this earth is always what has yet to be said. Viewed from the standpoint of natural history art has barely begun.

Click on the pic below to see Caravaggio's painting. 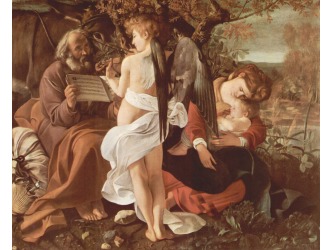